A Look Behind Orson Welles’ “War of the Worlds” Broadcast 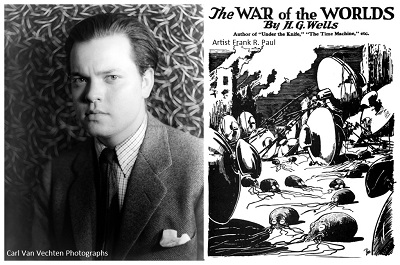 A Look Behind Orson Welles’ “War of the Worlds” Broadcast
Friday, October 29th at 6:30 pm

This is a ZOOM program. You can watch virtually in your home or visit the library to watch on the projection screen. If you’d like the ZOOM link, email Kim.

On the Eve of Halloween 1938, a young actor/director broadcast a radio drama based on a 40-year-old novel: The War of the Worlds. While the original broadcast had a relatively low audience, the impact it had, and continues to have, on American Culture is staggering.

But how much of that impact was reality, and how much has been exaggerated over the years? Were there riots in the streets from panicked listeners, or did most of the audience simply enjoy a well-done piece of theatre? Did Orson Welles know he would frighten listeners, or was this an unintended accident?

Learn the REAL story with our presenter Laura Keyes. Mrs. Keyes graduated from UW-Madison with a Master’s Degree in Library Studies and has been presenting on historic topics for over ten years.